It’s hard to be believe that we’re nearly halfway through 2015.  Yikes.  Where has the time gone….

The weather has been really changeable in Sydney the past few weeks, but I know winter has officially arrived because I’ve made chili.  I’m also writing this under my electric blanked with my ugg boots on- so…. yep, it’s Winter.

I’m sure I’ve written about this before but growing up Chili (or chili con carne as they call it here) was always a winter food growing up.  So I know it’s officially a cold winter’s day when I feel like a big warm bowl of chili.  That day came on Saturday when I turned to The Runner and announced that I felt like making Chili.

Unlike most things I cook, with chili I don’t really follow a recipe.  Well, I do- but I really don’t.

Years ago, probably 15+ years ago, I asked The Mom for her chili recipe.  At the time, I was expecting precise instructions and measurements and an easy to follow recipe passed down with love from mother to daughter.  This is not what my mother gave me.

The Mom gave me the same directions to make chili that you would give an unwanted guest to your house.

Ummmmm.  NO.  Those are basically directions to get lost.  If someone ever gives you those directions to a party, just stop.  They don’t want you there.  They probably didn’t even want you to know that they were having a party but you found out and they gave you a pity invite.  Sigh.  That is basically the recipe I was given by my mother.  I know, for those of you know what a wonderful mother I have, it’s hard to believe.  But it’s true…. 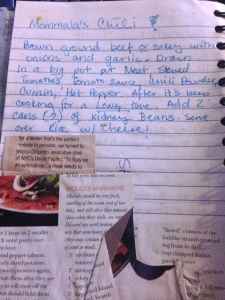 And there’s the proof.  Not one measurement, not one detail.  It almost asks more questions than it answers.  How many onions?  How much garlic?  What size can of tomatoes?  How many cans?  How much chili????  How long do you cook it for?   For a recipe with so little information, it actually makes the best chili in the world.  Not that I’ve ventured to try other recipes (why mess with perfection??)  Over time, I’ve added my own touches- this time I added a bit of beer and also a bit of chocolate and cinnamon because well, you can tweak perfection slightly.  But looking at the internet, none of the other recipes sound as good.

What got me started on this little research project was my colleague at work, let’s call her “Jen.”  Jen was planning to make chili for dinner after work today.  In my book, that’s a no.  Chili is not an after work dish.  Chili needs to simmer, mellow, develop over a few hours.  It is the perfect Sunday dish- you can leave it to cook while you read the paper, do the laundry and get ready for the week ahead.  “Jen” was planning to use the Hairy Bikers Chili recipe.   I read the recipe, and it’s a no from me.  They put red wine and flour in their chili.  Really????????/ NO!  I can’t condone that.  It’s chili con carne not spaghetti bolognese.  So then I started doing more research….

BBC Good Food– for a non-American entry, you’re not half bad.

Epicurious– I like you, but I think you’re over complicating things.  It’s total time is 11 hours and 45 minutes.   Yes, you read that correctly- nearly half a day!  You also want me to chill it overnight and come back to it to skim the fat.  I’ll be honest, you lost me Epicurious.  Same thing Gourmet Traveller– 21 ingredients is pushing my chili friendship.

Jamie Oliver– chickpeas in chili?  I. can’t.even.  Go home Jamie, your chili is drunk.  Get out of my sight.  In fact, I’m mad at myself for even including you in my chili roundup.

Ugh.  That put me off….  but I persisted and found some pretty cool recipes….

Chili Con Jamie– Dammit Jamie Oliver, I wanted to hate you for the one with chickpeas, but this one sounds pretty awesome– coffee and cinnamon sticks with chili made from brisket… my mouth says yes and my stomach says please.

Needless to say, I could go on…. there were options with chocolate, recipes for chocolate and beer, bloggers putting their twist on it- hello Nessa Family Kitchen and your spiced chocolate chip chili, pigpig’s corner’s chocolate stout and ancho chili con carne and Get In My Gob’s Coffee Chocolate Chili Con Carne.

I suppose at the end of the day, everyone has their own take on chili con carne. There’s not one right recipe.  You’ll never hear the judges on Masterchef arguing that a dish is not “technically” a chili con carne.  Without knowing it, that was the the gift that The Mom gave me when she gave me her recipe.  She gave me the basics but lets me choose my own adventure every time I make it!

4 thoughts on “Winter is here…”