So, this week was a big week of birthday celebrations.

We kicked off the party on Friday night at a new restaurant in Surry Hills called Master.  It was tasty, trendy, and very unconventional.   As with most fancy restaurants these days, it was all share plates- which is nice for dinner for two, but can be a downer in a group.  Luckily, it was just The Runner and I.  We had quite a few different dishes- most were delicious and totally off the wall. 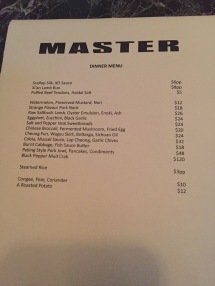 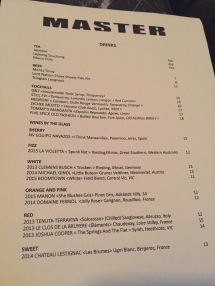 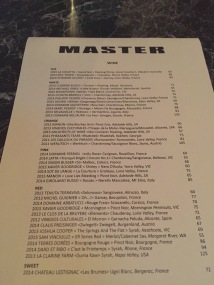 To start with, we snacked on Puffed Beef Tendons.  They were like prawn crackers, only more flavourful.  Nothing about them suggested tendon-ness, and clearly I never thought I would ever be snacking on tendons, but they were More-ish—and when they were gone.  I wanted MORE!  Then we had their signature dish of scallop silk with XO sauce- I can’t quite describe it but it was really light and didn’t actually taste that Scallop-y. 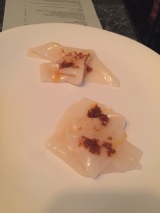 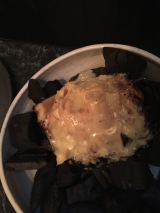 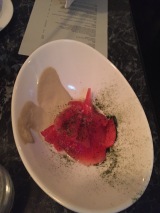 Watermelon with Nori and Preserved Mustard 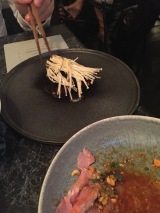 Next we had Watermelon, preserved mustard and nori, which was one of my favourite dishes of the night.  It was absolutely delish- the watermelon was the texture of sashimi but really refreshing and light.  Then we had Strange Flavour Pork Neck followed by Raw Saltbush Lamb.  The Pork Neck was good but the Lamb was out of this world.  It was raw (just like the name suggests) so it was like a Lamb Tartare.    It literally melted in your mouth as you ate it, the texture and taste were beautiful.  It looked like a work of art on the plate as well.  Next we had Burnt Cabbage- the presentation was really cool and the taste was great.  Our last savoury dish was Peking Style Pork Jowl.  My personal opinion is that anything that involves meat and a bread, pancake or tortilla wrap is an automatic winner.  And this didn’t disappoint.  The “pancake” in this case was like an Indian Roti, and the pork was scrumptious as well.    The Savoury dishes were all winners, part of me wishes we had stopped there and waddled down the road to Gelato Messina for ice cream (again!).  But we didn’t.

It was The Runner’s birthday and I had secretly told the restaurant that we were there celebrating.  My father used to surprise me at every birthday dinner by secretly telling the restaurant that it was my birthday- and every year I was so surprised that I burst into tears.  I’m not sure why I never expected it and how he managed to surprise me every year, but it always made me feel really special.    In truth, you can tell a lot about a restaurant by how they treat birthdays and Master hit a home run.  We were waiting for a few minutes and then the lights went out.  Everyone looked around and suddenly it felt like the entire waitstaff had surrounded our table and were singing Happy Birthday.  I was absolutely thrilled!  Mission Accomplished!  Birthday Surprise Delivered!  And to be honest, dessert was weird.  The first one was their Potato dessert, and it was amazing.  A definite crowd pleaser.  After the potato dessert, they brought out a second dessert that wasn’t on the menu yet as they were still experimenting with it.   Experimental, yes.  Delicious, well……  I’ll be honest, the dish was an onion with a sort of rice pudding.  It was good in parts- the rice and the buttery sauce were quit nice.  But it as oniony, very oniony and having an onion taste in your mouth is not a great way to finish a meal.  In fact, onion is not a great taste during a meal.  And there was nothing dessert-y about it.   It was sort of like going trick or treating and being given an onion instead of chocolate.  Even raisins would have made it a bit better…. But oh well, the restaurant overall was fantastic and I’d highly recommend it…minus the onion dessert. 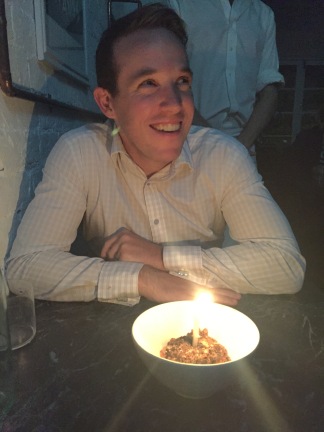 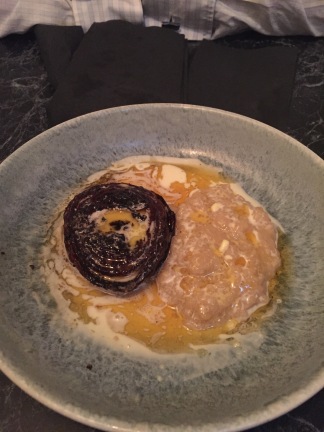 Saturday night- It was Pizza night for me- The Runner was out celebrating his birthday at the Rugby Sevens so I had pizza and ice cream and watched what I wanted on TV.  Let’s be honest, it was a win all around.

Sunday Night- Adam Liaw’s Lasagna Spaghetti with Garlic Bread Salad.  Williams Sonoma sour cream chocolate cake.   The Runner loves lasagne, garlic bread and chocolate cake.  A few months ago, there was a recipe for Lasagna Spaghetti and Garlic Bread Salad in the Sun Herald and it’s a winner!  It has all the flavours of The Runner’s favorite meals but it’s a more modern take on it.  It’s full of flavour and a beautiful meal for a dinner party.  It’s definitely one of our new favorite meals, do yourself a favour and make it…  but allow yourself some time, the sauce needs about 2 hours to simmer and cook. 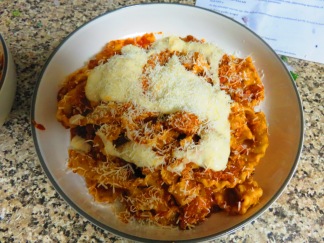 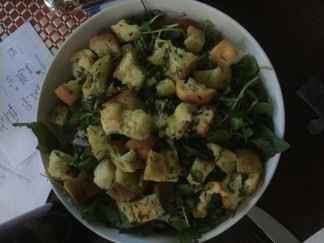 I also made Williams-Sonoma’s Sour Cream chocolate Cake, and it taught me an important lesson- I do not have the patience to be a cake decorator.  I love baking but my cakes are not pretty or elegant or pinterest worthy (unless you consider them for the Cake Wreck page).   I have so much respect and admiration for people with the patience to bake a cake and make it look beautiful.  From now on, I think I may follow my mother’s lead and buy birthday cakes…or just dump 100s and 1000s over the top of all of my cakes- they hide a multitude of decorative sins. 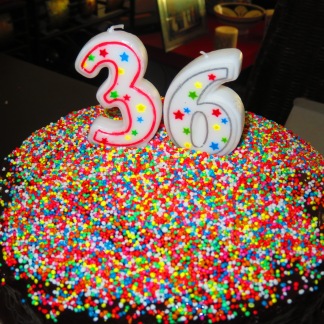 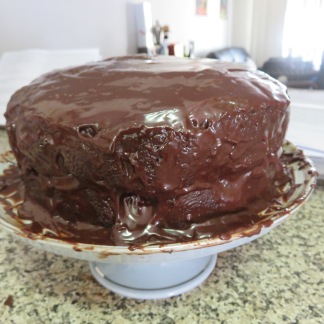 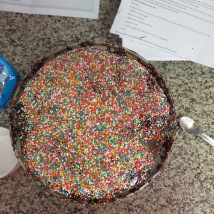 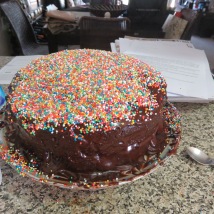 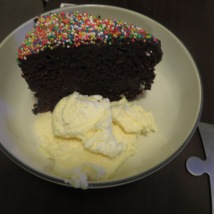 Tuesday, – Taco Torte– by Smitten Kitchen.  Another winning dish from Smitten Kitchen, this one was like a Mexican Lasagna/layered quesadilla/cheesy, beany tortilla goodness.   Honestly, there was nothing we didn’t like about this dish.  It was super easy to make and you could easily put different spins on it.  Add beef, sweet potato, more chili, zucchini, or pretty much whatever you would put into a taco or quesadilla.    Fantastic. 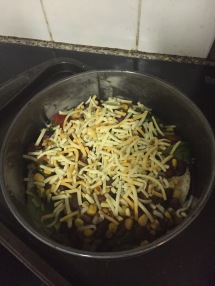 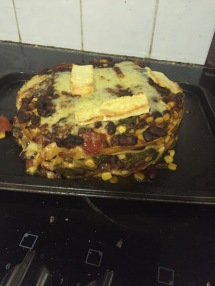 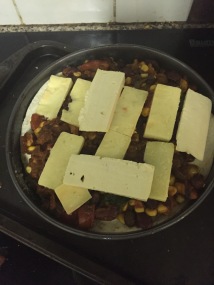 Wednesday- Movie Night at Open Air Cinema- So we had snacks for dinner!

Thursday- Watermelon Gazpacho with feta crema– So, I’m on a bit of a gazpacho kick at the moment, we’re in the last two weeks of summer and it’s SOOOOOOO hot out and gazpacho is SOOOO easy and this one is really tasty.    The feta on top gives it a nice amount of body and texture too- I cheated and didn’t make the actual feta crema but mashed some feta and cream together and put it on top!  The crema maybe would have been tastier but this was pretty good so we were happy! 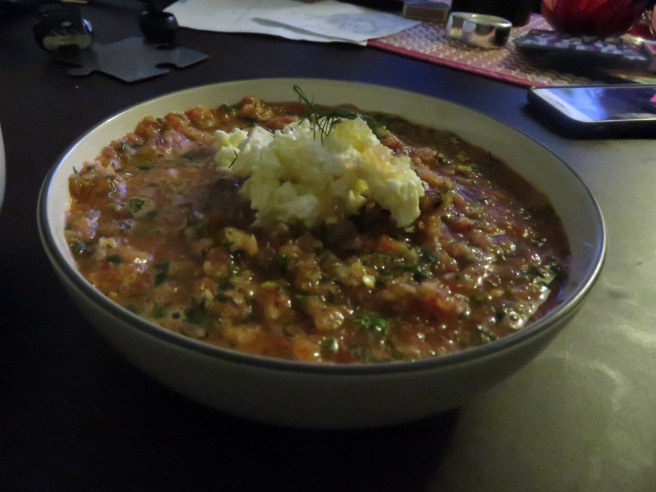 Friday- Sushi night!  We got Sushi takeaway from our local place.  We love bento boxes- it’s pretty much our standard order.

Stay tuned for next week- Tomatillo Gazpacho (without Tomatilllos), more cheese for Valentine’s Day than two people should ever have, and the best restaurant ever (hint- fried chicken and champagne are involved).