I’ve made my resolutions already and I’m busy preparing for a New Year’s Day brunch (as you do- or as I do really).  But mostly, I’m looking forward to 2016 and hope you are too.

Looking back on 2015, it was exactly the year that I needed.  The last 3 years have been full of the highest highs and the lowest low, so 2015 was a great year to just be.  I settled into a new job which I love (not as much as maybe winning the lottery and not working at all but….), visited three new countries that I’d never been to before (yes, I’m counting Dubai despite not leaving the airport), I tried to learn German (that did NOT go as well as I hoped) and kept doing many of the things that I love doing- cooking, pole dancing (despite breaking my toe early in the year), reading (32 books this year- just shy of my goal of 35), and of course, writing.  It was our first full year of marriage and a year that The Runner and I both learned a lot about ourselves- including resilience and patience (for me, more than him- he has the patience of the Saint of Patience).   I even had a surprise visit from The Mom.  Overall, it was a great year!

Tomorrow, we’ll start 2016 exactly how I hope it continues- with food and friends.  We’re hosting a New Year’s Day brunch filled with foods that will bring good luck and good fortune in the New Year (according to the internet!)

Manu Fieldel’s Lentil Salad– according to Italian tradition they look like coins and represent wealth.

Pete Evans’ Fig, basil, buffalo mozzarella, and balsamic salad– Eating many fruits are considered lucky and figs are a symbol of fertility

Smitten Kitchen’s Tres Leches Cake– Tres leches cake because I’ve always wanted to make one, and a round cake because in many cultures round cakes represent the cyclical nature of life- I’m even going to bake a coin into it for extra good fortune for someone.

Smitten Kitchen’s Fairy Tale of New York for after- I made a double batch to take to a 2nd Christmas dinner that we never made it to, so we have a LOT to get through!

So fingers crossed, with this menu, set 2016 to be delicious, abundant, healthy, wealthy and fun!

This is our first Sunday dinner party in QUITE a while- and our first one as Mr. and Mrs.  And our first one with our new, fancy wedding gifts—which were mostly kitchen supplies for me.  And believe it or not, I’m going to use quite a few of them today.

On the menu today are two dishes from Manu Feidel’s book, French For Everyone.

For those of you who don’t know Manu, he’s a French Celebrity Chef and one of the two hosts of one of my favourite food related shows, My Kitchen Rules.  My Kitchen Rules, if you haven’t seen it, is sort of a cross between Come Dine With Me Couples and Masterchef, and probably one of the few cooking shows I would potentially put myself on.  A lot of the people on there have all the gear but no idea, and some of the other ones are quite good (better than the people making beans on toast that you see on Come Dine With Me), but not good enough for to flambé duck eggs on Masterchef.

So today, I’m making a white bean, garlic and thyme puree for canapés (using our new food processor), for starter I’m making a lentil salad with speck, and for main we’re having Tomato and Fennel Braised Pork (made in our Le Creuset French Oven) with Goats Curd Mash.  We’re also having insalata caprese and a green salad on the side.

SO… let’s get started!

For starters, I was super organised in the kitchen today and weirdly enough got everything done ahead of time.  I think it was my new pots and pans and cooking utensils to be fair, but it could also have been Manu’s extremely well written and easy to follow recipes.  Both the white bean dip and the Lentil salad were super easy recipes to follow and super delicious.   Both recipes had less than 4 steps in them and both had very straight forward, easy actions.  The Tomato and Fennel Pork was slightly more labour intense, but not really.  I can’t blame Manu for that one, it was in this month’s Delicious Magazine.   And yes, I am on a first name basis with Manu.  For 3 months out of every year, he invades my living room 5 nights a week, I feel like we’re buddies.

Anyway, Manu’s bean dip was quite easy to make.  Manu clearly knows his audience and writes his cookbooks accordingly.  Manu writes for people like me.  People who would love to be the person who buys and soaks dried beans overnight but in reality will always be the person with a tin of cannellini beans in the cupboard.

For starters, does anyone actually soak beans overnight?  Are people that organised?  And if they are that organised, how??  Not just how are they possibly that organised (I can barely organise myself to buy all the ingredients, let alone start preparing  them the night before)  but how do they actually soak beans?  Where? And in what?  I can’t even begin to delve into the existential aspects of soaking beans so I just open the tin of beans and follow the recipe.   It’s pretty easy and after simmering the beans in garlic, thyme, onion and carrot for an hour and a half, I got to use my new food processor to puree the beans with olive oil. And that was pretty much it.

The lentil salad was equally easy and even more delicious.   Of course anything that involves bacon or speck is always good.   I mean really, name one time bacon has not made something tastier.  I won’t take it as far as King Curtis (and if you don’t know who he is, watch his video here)  but I am a big fan of bacon, and have been known to dance around the house singing about bacon- similar to this.

The star of the show however, was the Tomato and Fennel Braised Pork with Goat’s Curd Mash.  The mash was to die for,  the texture was really good, and the goats curd gave it a really nice texture/flavour.  Of course, I’m sure that no matter what I will NEVER be able to duplicate it.   But it was yum!  And the Pork was SUPER easy to make thanks to the French Oven.  After using it twice, I now get it.  The Le Creuset is AMAZING.  It makes cooking super simple and everything is cooked beautifully!  The pork was so tender and so evenly cooked and it was so easy.  Literally, I browned the pork then cooked off  garlic, onion, fennel, and fennel seeds.  After that had browned, I added red wine, canned tomatoes, and vincotto.  I put the pork back into the pot and put it all into the oven for 2 hours.  And that was it.  Dinner was done.  It wasn’t quite like the photo but it tasted great! 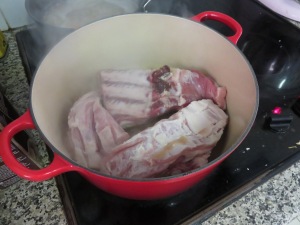 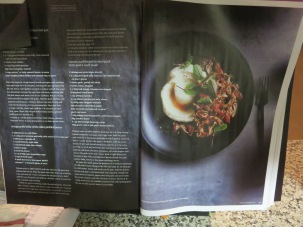 And in case you’re wondering, yes, we used the fancy plates and yes, I even hand washed them to clean them.  It was well worth it!