igh…. I have to say that the past 30 days have been pretty good.  Not only are we back in Sydney and settling back into married life but it’s been the inaugural Fattember.

What is Fattember I hear you say?  Fattember is exactly what it sounds like.  Fat-September.  Think Mardi Gras or Christmas (we don’t have a parade or a mascot or presents—yet) but for a whole month.

Maybe it’s a reaction to 12 months of 30 day restrictive eating challenges, or just a nice change of pace after having worked out, weighed, and portion controlled my way into a wedding dress.  It could also be just plain lazy.  I prefer to think it’s the start of something bigger.  We already have Movember, FebFast, Dry July, Parched March, and many other months of restraint (or indulgence) so why not Fattember?

Fattember is exactly what it sounds like.  Eating everything I want and not forcing myself to go to the gym 5 times a week.  Ice cream every night for dessert, fries, the odd hamburger, Mexican, cakes, candy bars, the whole shebang.  I haven’t measured, weighed or written down anything I’ve eaten.  And I haven’t worried about it either!   It’s been liberating and delicious and well, a bit decadent but it’s exactly what I needed.  Ok, maybe I didn’t need it, but I’ve enjoyed it!

Sadly, all good things must come to an end.  Fat-tember can’t last forever- I mean it could but then I would have to buy all new post “Fattember” clothes and I would probably start to take up more than one seat on the bus.    So, as The Runner makes me my last ice cream of Fattember (and literally uses up ALL of the ice cream in the freezer), I wave goodbye to Fattember and say HELLO to Droptober.

Droptober IS a real thing.  It has a website and over 2200 followers on Facebook- so unlike Fattember, it’s not something I’ve made up!

I’ve signed up for Droptober to try to negate the effect of Fattember.  A friend in Sydney started it, and it encourages people to be healthy and lose 2kg in October.  It’s a fundraiser for  Variety Children’s Charity as well.   And I’ve signed up for it.  So from tomorrow, no more candy, no more ice cream, no more fries.  I’m back on the bandwagon and back to the gym.  No excuses, 2 kg (5lbs) in 30 days…  Let’s get ready for summer and let’s get back to eating healthy.

Argh!!!! I received a box of cupcakes today as a present but unfortunately due to my 30 day challenge I couldn’t eat a single one 😦 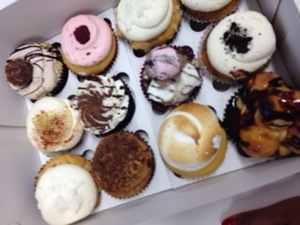 So I just licked the frosting off of one! It was delicious but not as good as the real thing!!! 72 more hours and this no carb November will be over!

Yes, I know I should be making a pavlova- or at least something that doesn’t require the oven to be on… it’s sweltering in here.  Baking cupcakes was not my best idea ever, but they are The Runners favourite cupcakes- Guinness Chocolate with Bailey’s Irish Cream Frosting (hence the name Irish Cupcakes).

I first made them for The Runner’s 30th cupcakes, and I think it could be what convinced him that dating me was a really good idea.  These cupcakes are awesome.  I found them on the internet- on the Smitten Kitchen blog, and I have to say they’re pretty good.  And the best part is getting to finish the can of Guinness while I bake!

So, that’s my Aussie story for today!  Hope you’re having fun wherever you are and whoever you are with!