So, if you’re not from Sydney, you probably haven’t been to Salt Meats Cheese or The Grounds in Alexandria.  So you’re missing out.

First of all, The Grounds.  The Grounds is smack bang in the middle of Sydney (not the CBD) but pretty close to inner Sydney in what used to be a fairly industrial area.  And if I’m honest, a few years ago when I had a chance to live in Alexandria, I turned up my nose and flatly refused to move there.  Well, gentrification is a powerful thing and now Alexandria is a pretty hip place for well, hipsters and yuppies.  The Runner and I are DEFINITELY NOT hipsters, however we *may* be yuppies…. Or at least the product of one time yuppie parents.  Anyway, The Grounds is a fairly new and fairly popular place in Sydney for those of us in our mid-30s who live near the city and drive mini-SUVs or Volkswagens.   They have great coffee, yummy food, a pig and some chickens.  Yup, you read that right, it’s a regular Old MacDonald’s Farm for city kids.  The pig is named Kevin Bacon-  get it, Kevin….BACON!  He’s a minor celebrity in Sydney having been the victim of a kidnapping earlier this year.   Yes, you read that correctly.   It was a massive news story.   The chickens are just chickens but there’s a lamb, or a goat…I’m not really sure which.  I grew up in a city, it has four legs and doesn’t bark or meow, it could be anything.    The Grounds is as close as I’ve gotten to a pig or chickens or lamb/goats/sheep unless you count the meat aisle of the grocery store.  Anyway, The Grounds has a garden, café,  and a bar, you can buy flowers, fresh fruit, blueberry lemonade,  donuts and all sorts of other treats.  You can have a coffee, have some lunch, get married (as some friends did) and have afternoon drinks.  It’s all very pretty and very urban- hence why the urban yuppies love it.  If you’re in Sydney, I highly recommend checking it out.

As if The Grounds wasn’t enough, Foodie-Hipster-Yuppie heaven aka Salt Meats Cheese is next door.   They have artisanal meats, cheeses, oils, salts and pastas.    They also have a wide range of imported and specialty foods.  They sell the type of food that seems like a great idea at the time but that you never actually eat and then you feel guilty about having in your house (I’m looking at you $8 spaghetti sauce).  You can buy chocolate pasta, a range of gluten free flours, flavoured olives and smoked and flavoured salts.  I still have not graduated to the level of Foodie-ism where I know what to do with a flavoured salt, but I do know where to buy them.   And yes, I have purchased, cooked, and eaten their chocolate pasta—and it’s delicious!  One of the best things about Salt Meats Cheese is that they also offer cooking classes.   For my pre-wedding, “hens” day, we did their pasta making class- super fun, and this past Sunday, I went to their Burger Making Workshop.

First of all, I learned a lot.  The class was taught by a butcher who explained how to choose and prepare our own meat for our burgers.  Hint—buying the pre-minced mince at the butchers is for amateurs.  And don’t even think about buying the pre-made burger patties because according to the butcher, it may not even be beef.

Lucky for me, I happen to have a meat grinder (as should everyone, of course!) He showed us how to prepare the meat (3 parts chuck steak to 1 part brisket) for the mincer- it has to be cold and cut up in chunks.   We were allowed to choose our own seasonings- but told to Keep It Simple!  The meat was the star of this burger.  And it was!  It was one of the better burgers I’ve ever made- and all I put in it was ground thyme, a bit of cooked onion, and tomato ketchup.  We cooked the burgers ourselves, with a bit of help and another hint- cook the burger in olive oil for 6 minutes on one side and only 3-4 minutes on the other.

The team at Salt Meats Cheese was awesome as well- they had a selection of condiments, a delicious brioche bun and piping hot, super delicious fries to go with it.  YUM!  It was a super fun Sunday and we even got to take some burger patties home… which The Runner was particularly pleased with!  It also inspired me to start doing more cooking classes!  There’s so much to learn in the kitchen and so much fun to be had, so in 2015, I’m going to make learning to cook better a priority!

See below for some photos from the day…. try not to drool too much! 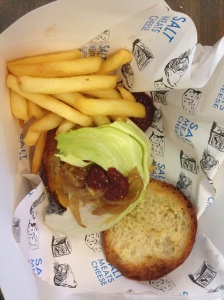 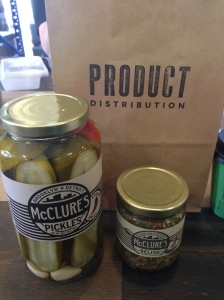 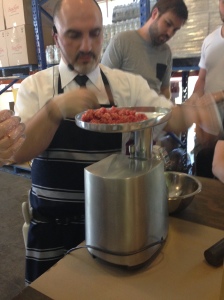 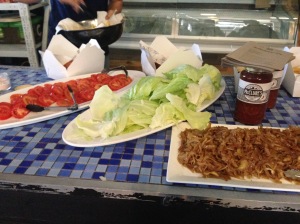 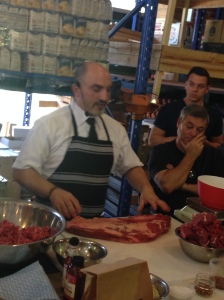 The Runner said this was the best hot chocolate he’d ever had…. 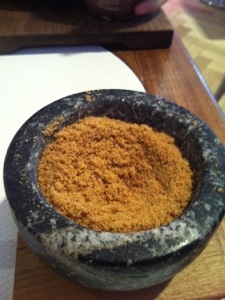